A delicious Zuppa Toscana crock-pot soup recipe that’s an Olive Garden copycat of their popular hearty kale potato sausage soup. Dinner is a breeze when you make it in your slow cooker. It’s a WHOLE LOTTA YUM! 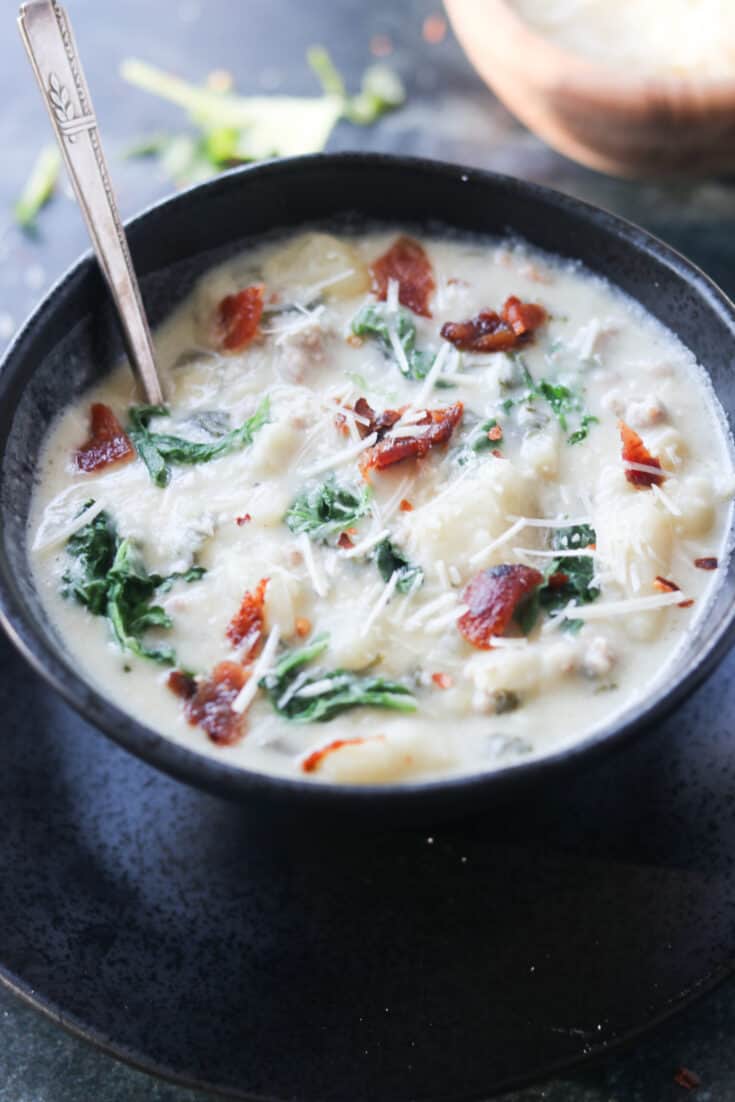 If Zuppa Toscana soup from Olive Garden is one of your favorites and you’ve been wondering if you can replicate it at home, you’re in luck! This Zuppa Toscana crock pot recipe is SUPER easy. Learning how to make Zuppa Toscana at home means you can customize it to suit your preferences, you know exactly what ingredients you’re eating, PLUS it costs less to cook at home compared to expensive restaurant meals.

I don’t know about you, but eating soup and salad and Olive Garden is always my go-to meal when we eat there.  Since I can’t have gluten and have to avoid their pasta dishes, eating their famous salad (without the croutons) and Zuppa Toscana (Olive Garden copycat) is always a favorite choice. We know you’ll love this Zuppa Toscana crock pot recipe! It’s easy, thick and hearty since it’s made in a slow cooker, AND it gives you tons of leftovers for another meal.

Why You’ll Love This Recipe

If you can’t get enough soup recipes and you want to eat a hearty bowl all and winter long (like we do!), then you’ll also want to make our popular crock pot taco soup recipe, our broccoli cheddar soup, or our crock pot stuffed pepper soup.

And if you have an Instant Pot, be sure to try our Zuppa Toscana pressure cooker version when you’ve craving your favorite Olive Garden copycat soup but need to get it started last minute.

What is Zuppa Toscana Soup?

Zuppa Toscana is based on the beloved Olive Garden Italian soup recipe that translates to Tuscan soup. It’s basically a potato sausage soup and the main ingredients are potatoes, cream, sausage, and kale that get garnished with Romano cheese and bacon.

Whether you call it Zuppa Toscana, Tuscan soup, or a Tuscan potato soup recipe, it’s simply a bowl full of goodness. Our copycat version tastes amazing and just has a couple of tweaks from the original Olive Garden recipe.

By making the Zuppa Toscana crock pot recipe, you’re making a soup that closely resembles a potato chowder since the slow cooking breaks down the potatoes more than a quick stovetop recipe would do. We personally LOVE it in the crockpot and prefer it as a hearty kale potato sausage soup aka chowder.

The Zuppa Toscana crock pot ingredients are all easy to find at most grocery stores and blend in the soup to create a comforting fall and winter soup you’ll make time and time again. Don’t be put off by the kale! Many people simply swap it for spinach.

Not a kale lover? Swap it for spinach. Use shredded parmesan instead of the traditional Romano. Skip the bacon since it’s already filled with hearty Italian sausage. Regardless of what swaps you make, crockpot Zuppa Toscana is amazing!

In case you’re wondering, the Olive Garden version also uses spicy Italian sausage, Romano cheese instead of parmesan, and they don’t peel their potatoes. Feel free to leave the potato skin on if you prefer.

Lower fat– to make the Zuppa Toscana crock pot recipe lower fat, use Italian chicken sausage, turkey bacon or skip the bacon, and instead of heavy whipping cream, use milk or a plant-based milk like oat milk.

Keto/Low carb– Skip the potatoes and use cauliflower pieces or radishes to bring down the carbs.

Sugar-free – To keep the Zuppa Toscana soup crockpot recipe sugar-free, be sure to buy Italian sausage and bacon that doesn’t add sugar.

While at first it might seem like there’s many steps for the Zuppa Toscana soup crockpot recipe, they all go quick and are super easy! You’ll need to brown the meat, add most of the ingredients to the crockpot, finish by adding the cream and kale after cooking, and then add the garnishes of choice.

If you don’t have time to brown the meats in the morning, do it over the weekend before and freeze them until the day you plan to cook the Zuppa Toscana crock pot soup.

Cook the bacon in a large pan over medium heat and reserve 1 Tbsp of grease. We love to make a lot of bacon at once to use in other recipes or to reheat in the morning with breakfast, which makes cooking bacon in the oven our favorite method.

Cook the Italian sausage in the bacon grease until cooked through, this will take about 7-8 mins. Add the chopped onion and garlic cloves to the sausage and cook until the onion starts to soften for about 4-5 minutes. Drain the grease.

Add the cream and kale

Once the potatoes are all the way cooked through, add the kale,  whipping cream and cook on high for 15-20 more mins until the kale is wilted.

Garnish with bacon and Romano or Parmesan cheese on top.

What goes with Zuppa Toscana soup?

Crock pot Zuppa Toscana soup is really a meal on it’s own since it has carbs, vegetables, dairy and protein, but sometimes it’s nice to at least have one or two sides to go with a piping hot bowl of soup. You could also serve the Zuppa Toscana crock pot soup recipe as a side dish or first course to go alongside something like a roast and roasted vegetables. My personal preference is always the classic soup and salad combo! Here’s a list of ideas to eat with Tuscan soup:

Can Zuppa Toscana soup be frozen?

You might be wondering if you can freeze Zuppa Toscana soup. Freezing this Zuppa Toscana crock pot recipe is NOT a good idea. If you’re concerned this recipe will make too much for you to eat, simply cut it in half or plan on eating it for a couple of meals that week.

To be honest, any cream or dairy-based soup does not freeze well since the cream takes on a grainy texture and can separate. And if that wasn’t enough to prevent you from freezing the potato sausage soup, potato chunks don’t freeze well either! Frozen potato cubes often end up mushy and gummy.

How to store for later?

This Zuppa Toscana crock pot recipe makes A LOT! Since you can’t freeze it, you’ll be happy to know it does store well in the fridge for up to 5 days. I prefer to store it in a glass container with a lid that makes it easy to reheat in the microwave.

The Tuscan soup might thicken even more after it cools and gets stored in the fridge, to thin the soup just add a little more cream, half and half, milk, chicken broth or even water until it’s the consistency you prefer.

If you’re following a special diet or have health restrictions, the Tuscan soup will work for many health plans simply because it uses all-natural ingredients and it’s easy to make swaps if you prefer a different ingredient.

Zuppa Toscana soup is gluten-free, unlike many of the other Olive Garden copycat recipes out there, because it doesn’t contain pasta.

To make the slow cooker Zuppa Toscana soup keto or low carb you can skip the potatoes entirely and swap it for cauliflower pieces. You wouldn’t cook the cauliflower as long (and I have not yet made this version so this is an educated guess), but I’d add the cauliflower the last two hours on low until it’s cooked through, or in the last hour if you’re cooking it on high.

Tuscan soup is healthy in the sense that it uses natural ingredients and doesn’t have anything that’s processed or artificial. It does contain sausage, bacon, whipping cream, and Romano/Parmesan cheese, which are all high in fat.

If you’re following a low-calorie health plan or watching your saturated fats, we’d recommend making lighter swaps or just having a small cup of soup. To lighten the soup and make Zuppa Toscana healthier, you can use Italian chicken sausage instead of pork, skip the bacon garnish, and use less parmesan or use a vegan parmesan substitute. Instead of heavy cream you could use part milk and part half-and-half, the soup won’t be as rich and it won’t be as thick.

Have questions or feedback? Please ask questions or post feedback on the post comments. Tap That Recipe Review Star! Be sure to leave a review after you make the crock pot zuppa toscana recipe or just tap the star rating you’d give the recipe!  Show Us Those Photos! Be sure to upload your zuppa toscana crock pot recipe photos on the Pinterest pin and/or tag us on Instagram at @wholelotta.yum! We LOVE featuring reader recipes!

Buy a bag of pre-cooked bacon from the grocery store or Costco to save even more time. 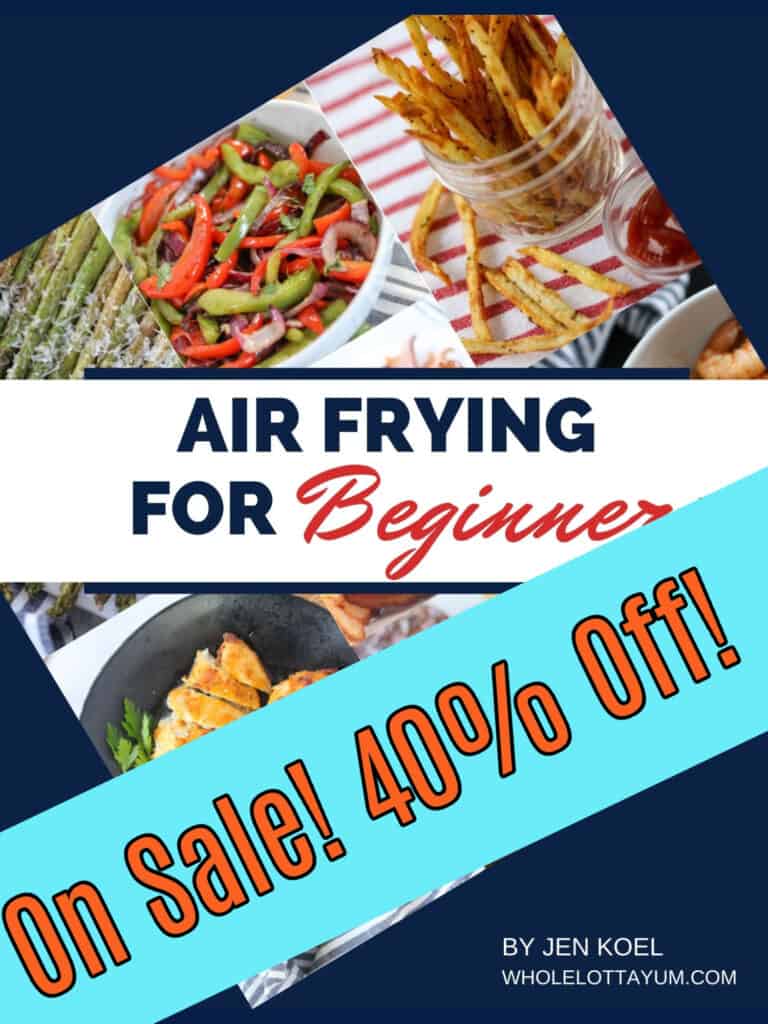 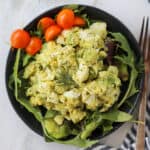 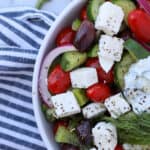 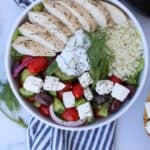 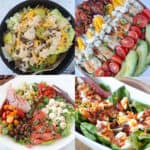 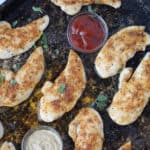 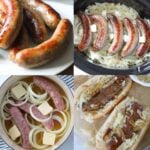 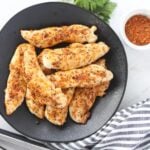 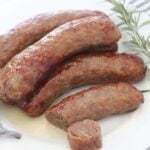